Greece, 418 BC. The Argives and their allies march for Tegea, and the Spartans (aka Lacedaemonians) led by their king Agis come out in force to protect this vital city, meeting their enemy about ten miles north at Mantinea:

When the Argives and their allies saw them, they took up a strong, unapproachable position and formed ranks for battle; the Lacedaemonians advanced against them immediately. And they came within range of stones and javelins [...]

[Agis] suddenly led the army back at a rapid rate before it engaged. He went into Tegeate territory and began diverting into Mantinean territory the water that causes most of the fighting between the between the Mantinaeans and the Tegeates, since it damages whichever territory it runs into. His intention was to make the Argives and their allies descend from the hill toward the diversion of the water, whenever they found out and came to the defence, and to have the battle on level ground. And he spent the day here by the water, diverting it.

Meanwhile, the Argives and their allies were at first astounded by the sudden withdrawal from close quarters and did not know what to think; then, when the others disappeared after their withdrawal, and they themselves were keeping still and not persuing, they began blaming their generals all over again, both for letting the Lacedaemonians get away the earlier time when they were nicely trapped near Argos and now because they were running away, and no one was persuing [...]

Confounded for the moment, the generals eventually led them down from the hill and moved on into the plain, where they set up camp with the intention of attacking the enemy. The next day the Argives and their allies went into the formation they meant to fight in if they met the enemy, and the Lacedaemonians, coming back from the water [...] saw their opponents just ahead, not only positioned in advance of the hill but all in ranks already. At that moment, the Lacedaemonians were fully as startled as at any time within memory; they had little time to waste in preparing. 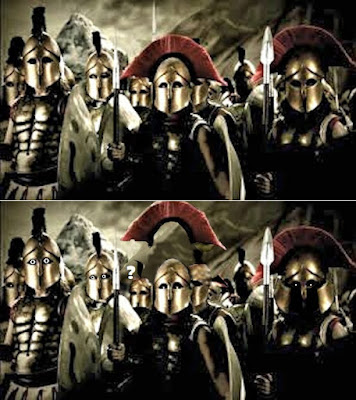 This is gripping enough without the excitement of a footnote:

It would seem that Agis' ruse worked perfectly; yet the Spartans were caught off guard. HCT ad 66.1 provides full discussion of this problem and its possible solutions, e.g. that the Argives marched at night (Gomme) or were concealed by a wood (Andrewes). Neither of these is very convincing, nor is there any evidence for them in Thucydides; the crux of the problem is that he shows no awareness that the reader might be baffled, and this is inexplicable even in a rough draft.

Thucydides is clear that the Spartans march off out of sight of the enemy to dig the diversion. They certainly do not expect the Argives to abandon their strong position, which is why they take such a drastic measure to cajole them out. And, one assumes, it will take more than a few hours for the waters in their new course to be noticed and to start upsetting the Mantineans.

So, the Spartans are surprised, but (spoiler alert) they clobber the Argives anyway.

With so many scholars and only one Thucydides, maybe it is necessary to be baffled regularly in order to write up one's
new-found problems in learned journals: publish or die.

Yes, this is an appallingly

Readers: Oh my, hasn't he shut up and gone away yet?

pointless post, but I have nothing much better to do at the moment.

I like the idea of the Tegeates and Mantineans bashing each other up endlessly about a water feature: nothing much better to do at the moment either.
at July 27, 2017

How's it goin' Mr C? No blogging usually means a) Blogger has found something more useful to do or b)Too far down the drain to bother. Hope's it's a.

All well, Mr X... even if a) something more useful is empty-headedness.